To say that I don't know where to begin hardly does justice to the amount of information that I could share about the last four days I have spent in Bangalore, India preparing for Rushmi and Vikram's wedding.

So, first the big picture.... every single moment since I have arrived has been more thrilling than the one before. Starting from the warm welcome I received from wedding guests who sought me out on the plane from Frankfurt to Bangalore and culminating with a fascinating dinner I shared with a man from my hometown who, after learning that I went to high school with his son and that he was good friends with my grandfather (one of the most special people in my life), decided that god had fated us to be seated together, it is all just too amazing for words.

Now, let me break it down to the nitty-gritty...

Day 1: Tuesday, December 22nd
I arrived in Bangalore just after 2 AM on Tuesday and made it quickly back to the hotel where I had stayed the last time I was here. By 4 AM I was asleep and by 9 AM I was up and at 'em for my first appointments. Since I rarely sleep more than 5 or 6 hours at home, jet lag isn't too much of an issue for me - thankfully! My first stop was the florist (called Nalesa, but they don't have a website). She and I had been corresponding for the past two months about containers, fabrics, flowers and candles, so I needed to see all of the materials she has sourced for me. After going through every detail for more than 2 hours, it was a great relief to feel that things were moving in the right direction. Production here happens so close to an event that it is unnerving, but in this scenario it works to my benefit since, despite my arrival only 5 days before the wedding, I could still make changes to a great number of things.

Next I was off to check in with the hair and makeup stylist. Wedding day beauty, and beauty in general, is a HUGELY important part of the culture here. I have seen more ads for beauty products than most other things combined and while in the US brides focus more on their hair, here, brides are definitely more focused on their makeup.

The last project of the day was a site visit to Tamarind Tree with my team, the florist crew and the caterer. We were able to walk through the venue and detail every inch. It was great to be back there because I had to make a few logistical tweaks based on the way the design had evolved since my last visit in August. Because of the extraordinary volume of traffic in and around Bangalore (think Times Square, but throughout the entire City!), the drive to the venue is an hour each way, though I doubt the distance is more than 12 miles.

Day 2: Wednesday, December 23rd
The day started with a visit from the florist to show me some of the modified products we had discussed the day before. People's willingness to go out of their way and come to where you are really amazes me. She loaded up her team as well as boxes of vases, candles, flowers, etc. and brought them all to my hotel. 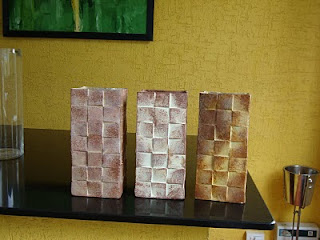 I was able to select the finish on the vase I had produced locally - I chose the one on the far left.

Next I met with the photographer and his team. It is such a pleasure to work with a group of people who are as committed to a project as I am - and that is how it is with VizioHub. They had the schedule of events for the entire week up on a white board and we talked through every detail. Their willingness to adapt their scope as well as the amount of research they had done prior to my arrival was just amazing. I came to India determined to show my clients and their guests that a wedding can be distinctive and unique and this group totally gets it. 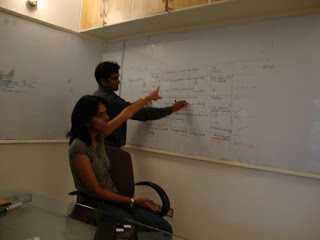 Tanu and Jyothish - two of the photo/video team

When I began working on this project, I didn't think that I would be able to be particularly helpful when it came to the catering aspect since not only is the food different, but the entire way food service is done is different, but after months of work, I think I can fancy myself an expert in South Indian catering and thus I was off to the ITC Windsor Manor to discuss the intricacies of the menu and the timing of the wedding day as it related to food. Unlike in the US, here the fine, 5-star hotels are often called upon to do off-site catering and are known to be far superior to traditional caterers.

Just two more stops before my day was done... first, to the cake baker - Institute of Baking and Cake Art. Since wedding cakes are not an Indian tradition, it wasn't easy to find someone to make the elaborate, 6 tiered concoction I had designed with the bride, but I have thus far been pleased with the attention to detail and willingness to accommodate my requests, so I feel good about it coming off without a hitch. To top it off, they are also able to make the cupcakes that the
bride requested for the Mehendi... though every time the baker called them muffins, I had to stifle my giggle. 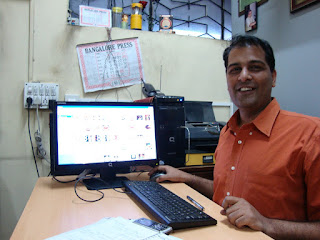 Manish, the owner and head baker 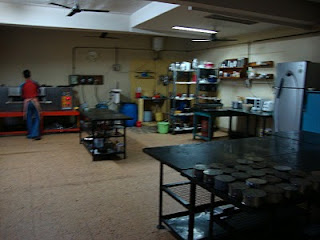 And, last but not least, I finished off my day by doing a final site visit with the florist at the restaurant where the Mehendi (henna painting party) will be held. This place is not to be believed...though Shiro Restaurant is hard to find online, Google UB City, the mall in which it is located, and it will change the way you think about India as a developing country. 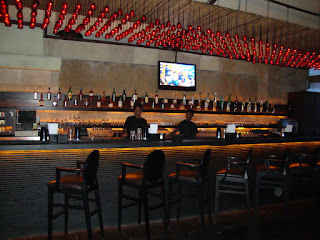 The bar at Shiro 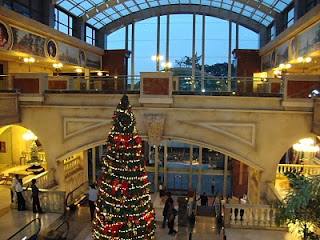 A view from inside UB City Mall

Before I could get started with the final preparations for the rehearsal and dinner that evening, I had to first go be fitted for a sari. Since I'll be busy working at the wedding, I will not wear a sari that day, but on the day following the wedding I have been invited as a guest to the post-party hosted by the groom's family and my client asked if I would be willing to don a sari for that evening. Of course! 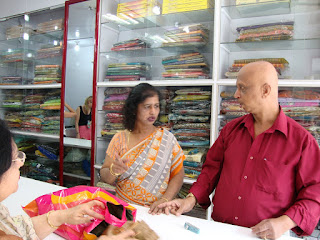 One more meeting with the florist to change a candleholder and then I could focus on the last minute details for the rehearsal dinner. Sourcing liquor is a huge and complicated project in India, so getting the wine, liquor and beer where it all needed to be took a chunk of the day. I also needed to meet the rest of my team who will be assisting me for the remainder of the week and brief them on the entire production. Then, the trek to the venue began again...

The rehearsal and accompanying dinner is not an Indian tradition, so most of the 75 guests were perplexed by what was happening, but after I was briefed by the officiant, I was able to talk through much of the ceremony logistics with the family and bridal party (Hindu weddings do not have bridesmaids and groomsmen, but they are integrated into this wedding).

The leisurely dinner began (mealtime in general here is quite leisurely with even a "right quick lunch" taking more than an hour) and eating, drinking and dancing lasted long into the night. The toasts were beautiful as were the simple white flower arrangements made only of orchids and lilies and wrapped with mango leaves. Despite a quickie power outage (which doesn't even phase an Indian for a second), it was a perfect evening and I was thrilled to receive dozens of compliments on what was most of the guests first-ever rehearsal dinner.

Day 4: Friday, December 25
Christmas in India is a recognized legal holiday, though almost all businesses are fully operational. There is a little less traffic on the streets and more Christmas carols, lights and santas than you may expect, but overall, much like any other day. I didn't schedule meetings in advance for today because I wanted to leave it as an overflow day and I wasn't sure who would work on Christmas. I did speak to almost all of my vendors and team, though, but only on the phone. It worked out perfectly because all of the shopping for the wedding that I had hoped to do earlier in the week hadn't happened yet, so I could spend much of the day buying pillows, baskets and throws for the Mehendi and wedding. I also had a few minutes to buy a handful of things for myself and for gifts. I am almost a bit ashamed of myself that I didn't have the bravado to head out to the shopping areas when I was here in August because it was so much fun and not at all as intimidating as I thought. 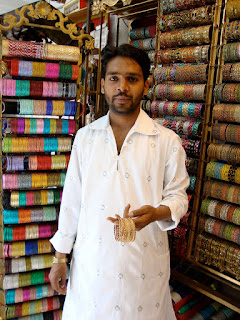 There were THOUSANDS of bangles to choose from!

I visited the bride and her bridesmaids at their spa day at the breathtaking White Mantra Spa and then had a little down time to finish all of the paperwork for the wedding and send it to all of the vendors before enjoying a lovely dinner for all of the family and out of town wedding guests at The Century Club where mother of the bride's family has belonged for many years.

Whoa... that was a lot... even for my chatty self! I have certainly learned my lesson and will not wait another 4 days for the next post!

What I could never convey in words or even with photos is the overwhelming warmth and positivity that is in the air here. The pace is slow, but not lazy, which makes it a wonderful place to work.

I can hardly wait for the events of the next two days and look forward to sharing the outcome of this amazing project.
Posted by Lindsay Landman at 12:51 PM 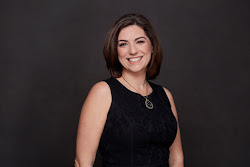